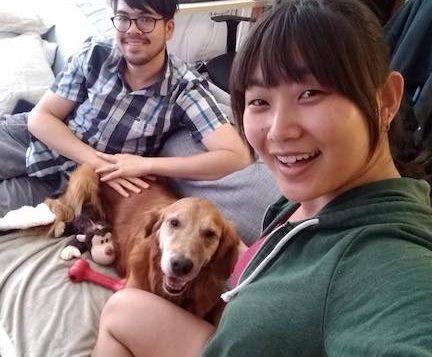 Meet Mr T, aka Thunder! Thunder is a young 12 year old Golden who was relinquished by his owner when she had to move and couldn’t take him with her. We have found him to be a perfect house guest with all those typical traits you love about Goldens.

We all know that Golden Retrievers are famous for being velcro and loving affection, and Thunder is no exception. No matter what you are doing he will find a way to communicate how much he desires your attention! Some of his favorite pastimes are snuggling, cuddling, holding paws and tucking his head under your arm. He also loves to be brushed.

Thunder has good house manners. He is house trained, knows sit and down, and even loves to hand you his paw. He doesn’t destroy anything but has occasionally been known to bring you a sock or shoe that doesn’t belong to him – and is very proud of his gift like most Goldens. He has been working on his leash skills with the help of a harness and doesn’t pull much unless he sees something like a squirrel – that is just so distracting!

Thunder wants to be with you as much as possible. If you are in the house, that is where he will be. If you are out in the yard, he enjoys some yard time too. He enjoys playing ball and will bring it back – then you throw a second ball and he’ll drop the first one and chase the second! It’s his own little version of fetch! He has good energy and loves to get out for his daily walk. He is young at heart and still thinks he can keep up with the young dogs when he meets them at the park.

Thunder is social and friendly with other dogs. He adores everyone he meets and will steal all the love he can get from his human family. He would thrive as an only dog – the center of your universe. He might also do well with a low key companion who is comfortable sharing their human’s affection. He also needs a home where there is someone around a lot of the time. His foster mom says this about him “love, love, and love…. Just wants love”!.

If you feel you could give Mr T/Thunder the love and attention he craves, please email Lori at regadog1010@gmail.com and let me know why you think you would be a great home for him! PLEASE MAKE SURE YOU HAVE HAD YOUR IN HOME INTERVIEW PRIOR TO APPLYING.