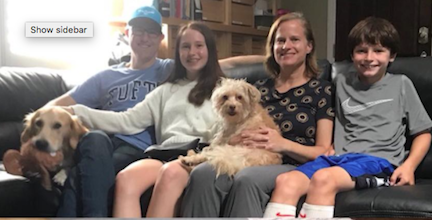 Pacha (or Pasha as his foster family calls him), came from Turkey where he had wandered into a man’s yard as a stray. He called our rescue partner and she took him in. Stray Goldens don’t fare well on the streets there so he was a lucky rescue. True to his breed, Pasha is sweet, gentle and social with people and dogs.

Pasha immediately fell into place with his foster family’s active lifestyle. With 2 other dogs and 2 kids under 10, he has been having the time of his life. He was even the hit of a slumber party his first night in foster care. He would do well with a very active family that will commit to his training, another dog who loves to play and kids as well.

Pasha is a young, high energy pup that still needs a lot of training. He does know sit. He pulls a bit on leash. He is mouthy but gentle. With plenty of exercise, supervision and toys available, he has not been destructive in his home except for his dog bed which was removed from temptation. When he is excited, he does zoomies – including on the sofa – so if you don’t want that, he will need some new guidelines. He sleeps well through the night snuggled in his foster parent’s bed. He has also started building some endurance as a running partner with his foster dad – a great way to burn excess energy and he tires pretty quickly at the moment. And he has done well going along to kid’s sporting events and activities.

Pasha loves to rough-house with his 2 fur siblings, play tug, steal tennis balls and wrestle. He respects the alpha female in the pack and seems to be in the middle of the dominance spectrum. He takes correction and redirection well (from both dogs and people). He has been to the dog park but doesn’t know really what to do there – he didn’t engage much and was ready to leave. He has been friendly on leash with other dogs and hasn’t seemed tempted by squirrels. Cats are an unknown with Pasha.

Pasha rides beautifully in the car – grateful to be with you. He just lies down. He has shown slight signs of nervousness when left at home – a few whimpers and scratches at the door. But he settles down and probably is comforted with his canine companions. He learned the doggy door quickly and didn’t have an accident until about a week and a half. Not sure what that was about. He was neutered fairly recently and did the usual marking outside on arrival but has not marked in the house. He went to a home with a pool but seemed to not want anything to do with the activity going on in the pool – shied away from it. Not a fan of the hose either. He is currently slightly underweight at 55 lbs.

Please have your application and home visit completed before inquiring about Pasha. His wish list includes: active family, another playful but mature dog to learn from, dog-savvy kids, someone home during the day and ready to work with an energetic pup that needs a bit of training. Pasha’s contact is Nedra at nedrawagz1@gmail.com.

At 1 year old and as an international Golden, Pacha’s minimum adoption donation is $1500. International adoption amounts are higher to cover the costs of transport. He is worth every penny and it helps SCGRR to keep rescuing amazing dogs like him from other countries!