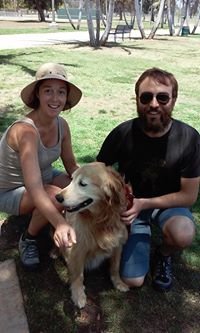 This Perrier he came into rescue via the shelter. Perrier is an 8 year old boy with a beautiful golden and white coat and soulful sweet brown eyes.

Perrier loves being brushed and will wrap his paws around you if you stop before he is ready. He knows some basic commands, sit, shake and loves a good cuddle at bedtime. He also enjoys a good bone to chew on when the mood strikes him.

Perrier does need to work on his leash manners, as he will pull if he sees or smells something that is interesting to him. He is protective of his home and will occasionally bark if he hears a dog outside that he can’t see. Perrier has great house manners he leaves his foster’s belongings alone. He also enjoys other dogs and children.

We have noticed that Perrier can be a little food & treat aggressive. Even though he likes other dogs if might be best for him to be the ONLY dog in the family. He hasn’t been around cats so a home without them would be preferred.

He is a low to moderate energy dog who is a wonderful companion to his foster family. He has a few lumps and bumps, which have been checked out by the vet and has been given a clean bill of health.