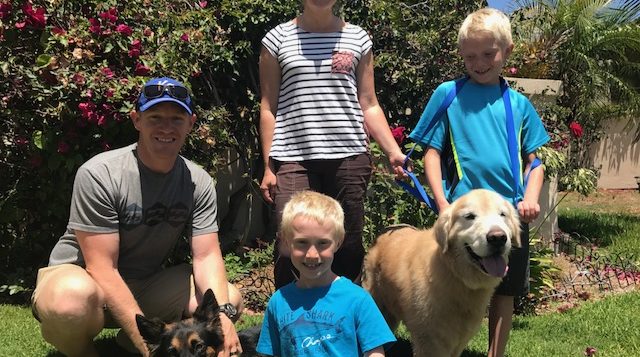 Adopted by a wonderful family always partial to seniors, River has a 4 legged sister to keep him company, plus two adorable young boys to dote on him!

River’s Journey:  River is a big bear of a dog who came to us from Taiwan. Found wandering the streets, his coat was dirty and matted when he was rescued. He was also emaciated and dehydrated. He was taken by our Taiwan rescuer to the vet, where he was treated and neutered. After viewing x-rays of him, the vets noticed his heart did not look right- they did further testing and an ultrasound of his heart, and confirmed that he has mild valvular heart disease, also known as mitral valve disease. Luckily, a great many mitral valve disease patients don’t require any treatment at all until they show symptoms. River showed no symptoms at all, no heart murmur, which is usually the first symptoms, nor any shortness of breath, and it was decided he should come to the U.S. to find his new forever home.