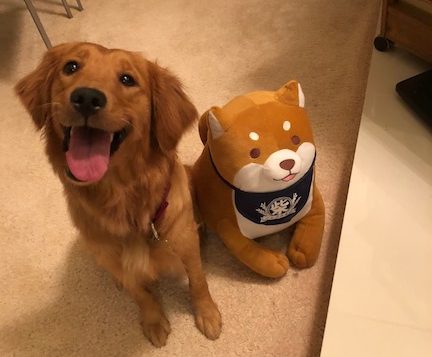 Quirky, that’s Romi (we call her Remi). Some may recognize her as she was only just recently adopted. After only a week in her new home (where she was living with a young couple and two cats, and doing very well) she had a seizure, followed by another the next day. While we did not yet know what the problem was, they did not feel they were willing, or able, to deal with it, and she came back to us. We went ahead and had an MRI done, along with a spinal tap. We discovered that she has a slightly abnormal brain structure caused by either a past injury or infection of some sort that has lead to some quirky behaviors in an otherwise normal, healthy dog. She is currently on phenobarbital, and has had no further seizures since. Her new family will need to work with their vet initially to monitor her blood levels and that her dosage remain correct. While she will likely remain on the drug for life ( phenobarbital does not cure seizures in dogs, or humans for that matter, it manages the symptoms and the seizures can be controlled), some dogs do grow out of it as they mature.
We don’t really know too much about her background other than she was surrendered to Carson Animal Shelter. Her head is usually tilted to a 2 o’clock position with her ears propped forward. She has an amazing smile and a tiny frame at only around 40 lbs! We believe she is only 1-2 years old. Due to her size, she is compact in size  and can be easily carried around. She is pretty calm when around you, loves goes to the dog park and walks. She does not experience separation anxiety, but doesn’t do well with crates. She gets pretty anxious and gets vocal if crated. She does okay with baths and trusts that you have her best interests in mind. She is totally okay with being picked up in any fashion and having her paws cleaned! She learns quickly and has learned sit and wait. She can perform down with success if you guide your hand.
Completely potty trained prior, because of the phenobarbital she is taking, she has an increased appetite and thirst leading to more accidents with peeing inside the home. Due the indoor cats, and no doggie door, she does not have ready access to the outside when she needs to relieve herself. She would probably do better if she had either She does pee on a puppy pad with success, and doesn’t poop overnight or during the day when we are gone/asleep.
She does not counter surf or beg for food either. She loves to be petted and is kind of indifferent with grooming. She has a soft mouth (we tried the egg test with success!). She doesn’t jump on furniture at all and will always sleep at your feet. Even when I welcome her up or bring her up she hops back down. Exercise wise, a walk or two a day would suffice. She mostly wants to be with you.
She does okay with my 2 cats, its only when she gets excitable then my cats no longer tolerate her. On walks she doesn’t bother other dogs and walks past them with the occasional glance. She does great with other dogs when playing with them but she may intimidate a smaller dog as she can play rough, and can certainly hold her own with similar sized and bigger dogs!

Remy is amazing on a leash. She walks gracefully and VERY close to you. She is almost always glued to my left leg. She loves the occasional head pats to let her know she is okay. She is definitely a follower and looks to you for guidance and trust. She always does really well on car rides. She just mostly enjoys laying on the seat, and doesn’t really stick her head out the window.

Remi is an incredibly sweet little girl who really has not had much of a break to date in her life. She has a huge golden personality in a petite golden body.  She is a very easy girl, and does not require much other than her daily (inexpensive)medication and someone to ensure that she faithfully take it, which she easily does. Being such an easy girl, she will fit easily in to any number of families. We would really like to place her in a somewhere she has a human around much of the time, as she really loves her human(s). She could be an only dog, but would do really well with a suitable canine companion who can lead her, and not dominate her. Cats would be okays long as they can tolerate her puppy behavior, and see her straight when she pushes the boundaries. She would probably also do well with kids. If you feel that you could give this little girl her perfect forever home, and have completed the application process, please contact her rep at bodie99@cox.net.
>

At around 1.5 years of age, the minimum adoption donation for Remy is $600.