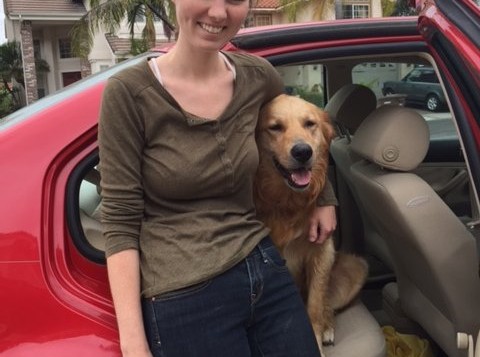 Meet Ryan. This serious faced young boy, who came to us on St. Patrick’s Day, is starting to feel so much better now. When we got him, he had spent some time at the shelter,  was seriously emaciated, almost skeletal, and had had a bad case of flea dermatitis, causing him to lose most of the fur on his lower back and tail area. To make matters even worse, on his first night at his foster home, he was rushed to urgent care with what turned out to be aspiration pneumonia. This poor guy could not catch a break, and he was miserable.

Fast forward almost a month. Ryan is the sweetest, nicest, most grateful golden you will ever meet, chowing down anything placed in front of him, so now his head does not look so clownishly large on his spare frame, and he is up to a more healthy 60 lbs, with a ways to go. His fur is growing back in nicely, and he has discovered what playing is all about with his foster brother. Boy, those tennis balls are a brilliant invention! Gotta love’em! And rope toys and tug o’war? Don’t even get him started..

Ryan is gentle and sweet, walks well on a leash after the initial excitement of the whole process wears off, and loves everyone he meets. He is great with other dogs, and does not appear to have a strong prey drive, showing only mild interest in the ducks and bunnies at the lake. paragraph. Ryan likes riding in the car, and takes treats very gently.  He does need some training, as he tends to get excited and jump up on people when meeting them, but corrects easily and well. He tends to follow his foster brothers lead, preferring to let him be the alpha and take charge. He does not appear to  have any bad habits at all-he can be left loose at home alone with no destructive behavior, and doesn’t dig or chew, and will only bark to alert you. He does not try to bolt or escape, and has zero interest in being anywhere that you’re not. He is affectionate, loving, and vocal, and is great with kids.