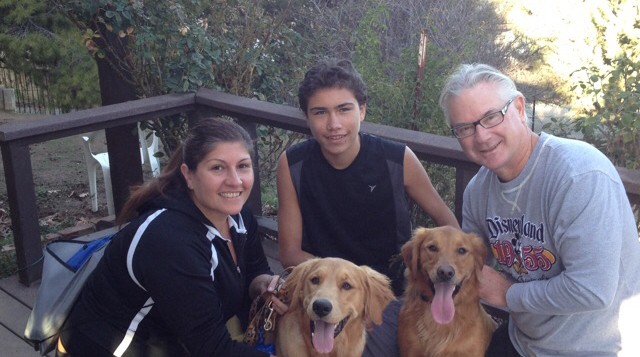 Sam is a beautiful, cuddly, extremely loving, playful, intelligent puppy goofball who bonds quickly and easily with people and other dogs. He looks like a grown dog but he is very much still a kid.

Sam’s ideal FurEver Family will need to have time and the room to play alot. He LOVES to play Chuck-it ball and wrestle with his 2 yr old Golden foster sister. He responds well to having a mentor dog, and follows her lead about house rules. When he’s not running and playing, it’s always fun to stay busy with a Giant size Deer Antler (not elk, they splinter) , or some other large breed appropriate toy because he loves to chew !

While he has been in his foster home, he has also been practicing new commands and getting good at them quickly. He will usually sit on command with a hand signal and with treats will “down” , “down stay”, “down sit”, “wait”(at the door or for food) and we are working on “leave it” “off” and “4 on the floor” . If you are used to training an older puppy, he is an apt pupil. If you are not experienced, a series of obedience classes is highly recommended. He is eager to learn.

Sam does not like to be crated. He likes to sleep on a dog bed near his family. He behaves well left in a puppy proofed room, especially if left with another dog. I have left him home alone without incident.

Children would be fun for him as well but I would suggest older children as he has not yet mastered the concept of his toys vs their toys and my be a bit too exhuberant with kisses and puppy hugs for a toddler.

Speaking of exhuberant and eager, he recently visited a Canine Sports Center where he got to try out the Agility equipment. He flew through the tire and over low jumps (no high jumping until 2 yrs.,)  up the A-frame, through the Tunnel and up on Table without a second thought. A future Agility Contender? With the right training, I think “yes” !

He not only bonds quickly with other dogs in the house he is tolerant of those around him. There are neighbors with agressive barking males next door to his foster and he just ignores them after being told ‘No barking’ a couple of times the first few days. He has also met the cats. He is very interested in them, but will not chase unless they run. Otherwise it’s a walkup, sniff , maybe a whimper of ‘play with me?’ and then goes about his business if they say ‘no’ .

Sam is one special pup. Looks, personality, a passion for life and an abundance of affection for those around him; the whole package.