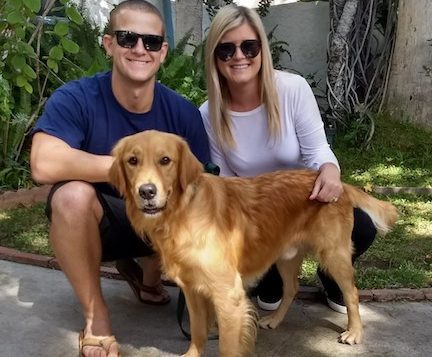 Shake our 1-1/2 yr Golden Retriever was rescued from a government shelter in Turkey just before they were going to turn him out onto the forest to fend for himself. Next he found himself in Los Angeles!   Shake just found his forever home and he can continue to be a velcro pup as one of his new parents is usually at home or close.  He’ll live blocks from several hiking trails that his active dog parents will take him on.  The best of of everything ahead for you Shake!

Shake is our handsome 1-1/2 year Golden Retriever who arrived from Turkey in late August.  He was rescued from a government shelter in Turkey just before they were going to turn him out onto the forest to fend for himself.   He’s been an exceptionally happy boy from the instant he stepped out of his crate upon arriving in Los Angeles.   He is a sweet, loving,   affectionate and extremely gentle-natured boy with a medium to high energy level.   At about 52lbs, he is not big framed but he does have some weight to gain as he matures.  He has no behavioral issues, great house manners, and no health issues.

Shake has lived in an apartment during his foster so either a home or apartment/condo could be suitable.   His foster works from home and Shake has received multiple (3-4)walks daily – up to a couple of miles total.  He is still an active young pup and will need an adopter to give him daily exercise and or multiple walks.  If he’s home alone for 3 or 4 hours he has sometimes looked for items to get into – usually in the trash can (i.e.  paper or plastic bags).   He has not chewed anything important such as furniture, clothing, woodwork, etc.  but he might pick up with a shoe in his mouth  with his soft bite, but not chew it.   Therefore, the ideal home will give him the attention and exercise that he needs.

He is house broken and has not had any accidents, but has not learned to hold it for more than 5 hours during the daytime ( he does hold it through the night), so he needs frequent walks until he gets better at that.   If he has a full bladder and gets excited when you come home or start to play with him he has had a little seepage of pee in the excitement of seeing his humans.   His new humans will need to have a schedule that can accommodate frequent walking until he learns to hold it longer.    He has never taken to his crate completely and has whined when locked in it.

Shake loves to cuddle with his foster dad, and must have one paw or full body weight on his human whenever possible – a typical Velcro Golden Retriever—if you get up, Shake will follow you wherever you go.  But whenever his foster dad works in his home office, he knows to leave him alone, and is content laying on the floor in the living room.  At bedtime, Shake has been invited to curl up on the bed but he could easily learn that his dog bed besides the human bed is where he should sleep.

When focused Shake has learned some basic commands like sit and even shake hands, and sometimes will retrieve balls.  We don’t know if he’ll enjoy swimming.   He was near a pool with his foster dad swimming in it and he was a bit scared and barked that his dad was in trouble and Shake stayed clear of the water and splashing.     Shake would benefit from his adopters taking him to basic obedience training.

Shake loves his multiple walks and is good on a leash but needs some more training.  Sometimes at the start of a walk he will pull on the leash but after 5 minutes he chills out and is fine for the rest of the walk.   If another dog presents itself he behaves assertively and is not submissive.   He has never shown any aggression towards dogs or humans; however, we feel that he does have a prey drive at least towards squirrels so we are not certain how he would do with a home with cats.  He has been around other friend’s dogs and  has done fine with other dogs.   His foster   thinks that Shake might be might happier in a home with no other dogs but he has been the only dog  at his foster’s home, does get along well with other dogs and the right canine brother or sister may work just fine with Shake.   Shake might be too active around young toddlers and knock them down. He does like all people that he meets and warms up to them quickly.

Here is Shake’s wish list: a home where somebody is home during the day so that he is not alone for more than 5 hours or so, he really loves his humans and the more of them the merrier, , kids who are at least 8 years old so he won’t knock anybody over, an adopter who is active with a willingness to work on his leash skills and general obedience skills, multiple daily walks and other exercise  and perhaps a home with in/out accessibility where he can go into the yard.

If you think you would be the perfect home for Shake, please Email Barry at
scgrrescueadoption@gmail.com and let us know about his possible forever home.  Please make sure you have filled out an adoption application and or have already had your home visit before applying for Shake.   Shake’s  ID # is  4640  and his adoption donation is $1500.  International adoption donations are higher due to the cost of importing these dogs.