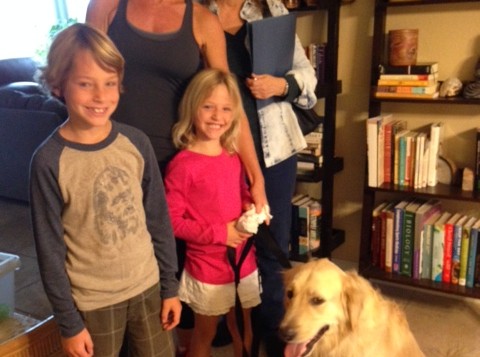 This is Tuffy… a beautiful blonde english cream boy who will be three in December. He is a big boy weighing in at about 80 pounds.

Tuffy was acquired by his prior owners at about 6 weeks of age but unfortunately, due to his son’s allergies, has spent much of that time alone unhappily in the backyard. His family decided to do what was best for him and find him a new home through rescue.

He is housetrained, knows his sit and down command, but that is about it. He would benefit greatly from some obedience training-he is a smart boy and wants to please.

He has lived with children, ages 12 and 14 in his first home, and now 5 1/2 and 7 1/2 in his new home, and does great with them. Initially, he showed a somewhat anxious reaction around the foster kids who are typical boisterous kids, but is already showing a much more relaxed disposition with them, getting excited when they arrive home and becoming more and more playful with them.

He can be a little shy and timid around strange men but not around women and kids. He prefers not to be outside alone in the back yard, maybe he feels he will be left outside alone there again, and gets anxious if his human is not out there with him. On the other hand, he does great being left alone in the house-he has had no accidents, will come and tell you when he needs to go out, and is the perfect houseguest.He has no separation anxiety, unless left alone outside, and is good for up to 6-8 hours alone at home.

He is not possessive of food or toys- he does not like to give up his ball or something he is chewing on, but will let you put your hand in his mouth to try to get it. The same goes with food-the kids have been around his bowl while he is eating, and he is fine.He loves riding in cars, we don’t know about swimming, but he does love to climb into the shower! He likes to sleep next to his foster mom’s bed.

Tuffy does like to be the alpha dog though and should be placed as an only dog. He has shown aggression with other dogs in “his” house, and he uses a dominant approach around both large and small dogs on trail walks.