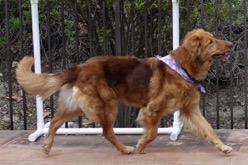 This shy pretty girl is Zen. We don’t know much about her, where she came from, or what her sad life was like before she found herself dumped at a local shelter by her family, who stated they were moving and did not want to take her with them. They were not very clear on her age either-she has probably been passed around a bit. What was quite clear was that she has not been very well treated, nor cared for. Underweight, she was filthy and frozen in fear, with her tail completely tucked under her belly-you could tell she was just waiting to see what horrible thing would happen to her next. Now after just a short time in foster, a happier, more confident dog is beginning to emerge

Zen is proving to be quite a sweetheart, with the temperament of a golden and the independence of a German Shepherd, which is what we believe mom and dad were. She is very low key and can be a bit shy when she first meets a new human, but quickly warms up to everyone she meets, including children. She knows how to sit and give you her paw, but doesn’t appear to have any other tricks in her repertoire. She is fully potty trained and has very good house manners-she has been left alone for several hours and shows no sign of separation anxiety, nor any destructive tendencies. She has not done any counter surfing, even though she is pretty motivated by food. Despite having a voracious appetite, and still quite underweight, she has not shown any type of resource guarding when her dinner bowl was removed while she was eating.

Zen can be a little apprehensive when meeting new dogs, but shows no signs of aggression. She has no problem allowing a quick sniff, and then moving on. She been both on, and off leash at a dog park, when meeting new dogs, and reacts the same to both experiences. She loves her walks, but probably wouldn’t mind a good hike or run if given the opportunity. While she is medium energy, she definitely needs a daily dose of exercise, especially to keep her mentally stimulated. She doesn’t really play much with toys or balls, but loves a good chew on a bully stick. She enjoys car rides-maybe a little too much, as she tries to ride shotgun with you in the front seat.

While Zen loves her humans and being near them, she does not need to be glued to your side at all times. She will make it a point to explore her spaces when inside-she likes to keep an eye on things and what is going on. That said, she will check in, come over to see what you’re up to, and to stick her face in yours for some loving. If outside, she prefers you outside with her, probably to ensure that you don’t shut the door behind her and leave her out there alone.

Zen needs a home where she is the only dog. Even though she is fine with them outside the home, she is the type of dog that has not had much in life, and now that she finally has a human of her own, she would definitely prefer not to share them, and would be happiest as the queen of her own castle. Since we don’t know about cats, we will err on the side of caution and say no felines other. She would probably be ok being left alone some of the day, but like most canines, she would of course prefer as much of her human(s) that she can get. If you have completed that application process and would like to meet Zen, please drop her rep an email at bodie99@cox.net.