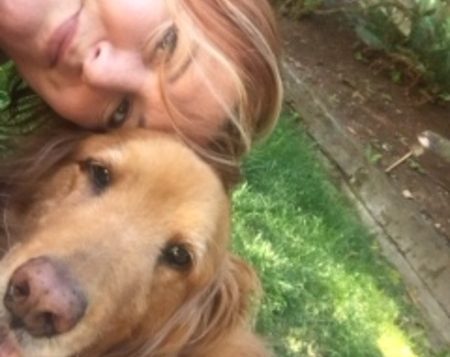 Murphy Bear *Always in our hearts

I just wanted to give you the update that Murphy Bear has been steadily declining in his ability to use his back end and as of Friday has little to no ability to get up or walk much without assistance. We visited the Vet, an outstanding lady here named Carla Rasmussen DVM, who looked for anything that could be done, but we’re out of options. We don’t know if his cancer tumors are hitting his nerves, but his extreme osteoarthritis is more likely the culprit. The compassionate care vet is coming tomorrow evening to ease his pain. He’s enjoyed sunny mild  days with pig ears and lots of love until tomorrow. Murphy was previously known as DuPont. An owner turn in that was sketchy to say the least. He suffered a lot of mental trauma and was starved when he came into the newly formed SCGRR. I remember seeing him at the Teresa’s event in Simi Valley. He sat in Malia’s lap terrified and despite attempts to give him a hot dog, he refused, and just shook and panted scared of the world. A hot dog today would cause you to lose a fingertip in his zest to snatch it from you! He’s been our cute, funny, scared of everything, goofball, stuffed bone humping joy despite his many fear based quirks. He’s been with us 8 years and it will be very hard to let him go tomorrow although I know it’s the right thing to do. Thank you for bringing him into our lives Jenni and SCGRR. I’ve attached a few pics of him I took today. I say he’s one of the cutest out there!