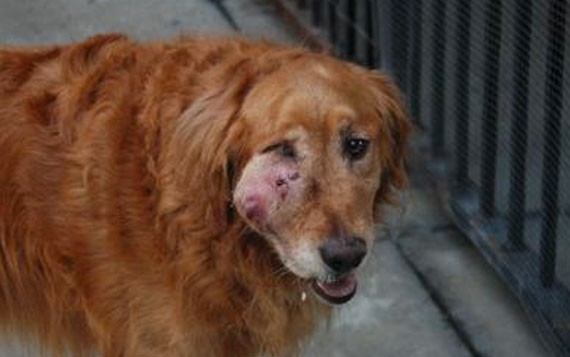 Oliver • Always in our hearts

Oliver was dumped in the shelter when his family found out he had Osteosarcoma. The kind, decent thing would have been to humanely say goodbye to their companion in the arms of those he loved, but that was not to be his fate. Instead they brought him to a hard, cold unfamiliar place for a dog, where he became increasing depressed and wondered what HE had done wrong to up end up at such a place. The good folks at the shelter called SCGRRescue to come and help this angel. Oliver had little time left, for his cancer was very invasive, and since it was neglected for so long, surgery was not an option…it has already eaten into much of his face.
So for a week, we kept him pain free and filled with his much loved Big Macs. His tail still wagged, and his happiest moments were when he is being petted.
We do know that his time with us was filled with love, comfort and all the cheeseburgers he would ever want.
And he crossed over the Rainbow Bridge, surrounded by love and knowing that his life mattered.