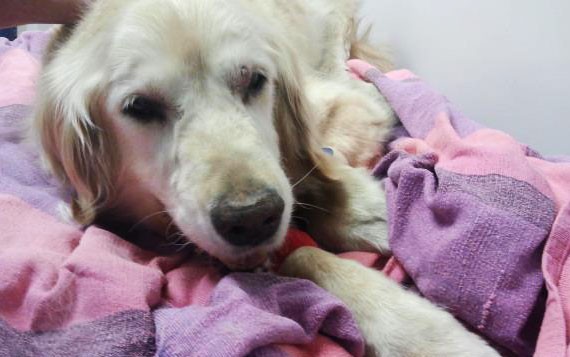 Princess Pearl • Always in our hearts

A loving Message from her foster

Right after July 4th 2011, Flori called and asked if I would be willing to temporarily take in a foster. I was hesitant because my 15 year old lab, Sadie, had been attacked by a golden I’d gotten out of the Downey shelter 2 days earlier (by the way, Flori helped that doggie-aggressive golden get placed into a wonderful home with the help of homeward bound) but I digress… after some reassurance from Flori that “Princess,” was not aggressive and moreover, was very ill and did not have much time, I agreed. when Princess arrived I thought, “yikes! what did I get myself into?” she was a sight for sore eyes, alright. She had been shaved (her fur had been covered in bugs) and she had oozing sores and tumors all over her body. but when she looked up at me, right there on the spot, I fell in love with Princess Pearl. The next 6 weeks were hardly easy.

She had surgery and many, many trips to the vet. she could not climb stairs or walk well, wearing a cone was a way of life, but she tolerated all of it gracefully. In time, her beautiful fur grew back and she got a little stronger. We built her a ramp out to the yard and got a larger doggie door. point being, she was a part of our lives and temporary became permanent. everyone that came over loved her and she loved everyone back. at times I wonder who saved who. Pearl was there for me. she saw me through my father’s death and 2 months later, the death of my lab Sadie. Pearl was never demanding but always profoundly present… last week, she started to pant uncharacteristically. I feared it meant pain so I brought her to the vet. we decided that it might be a reaction to long-term prednisone use so we cut back, acknowledging that it was no longer the goal to outrun her lymphoma but comfort. later that night, she had a seizure. I didn’t leave her side for fear she was dying but she peacefully slept through the night and the next day, woke me for her breakfast. still things weren’t right.
She always had weakness in her legs but she fell much more in the week that followed. I knew in my heart the end was near. This morning, she eagerly ate her breakfast and then something happened. when it was time for her noon bone, she showed no interest. In addition, she was unable to get up. as luck would have it, I am out of town and not scheduled to return until tomorrow. I prayed she could wait for me but my son called and said he was afraid she was in pain. I told him to take her right to the vet’s and I called Barbara to let her know. my son and his dad lifted Pearl with the help of a blanket into the car and brought her to Dr. Campbell. he suspected an internal bleed and it was clearly Pearl’s time to go.
Through the miracle of skype, I was able to be “in the room” and watched Pearl take her last breath while she was petted and hugged by her family. She arrived at Rainbow Bridge at little past 4pm today, May 3, 2012… Pearl had the book thrown at her. in addition to not being treated well by her first owners, she contracted 5 different types of cancer which Dr. Campbell said is virtually unheard of. pearl was unaware of any of it. even today she remained calm and sweet, basking in all the attention. the past 10 months have been a gift and though short, I pray Pearl had a taste of what its like to be a cherished member of a family.
She taught me so much, mainly that the path is the goal. Who knew that I had a pearl-shaped void in my heart… rest in peace, my sweet angel and say hello to Sadie and all our friends at Rainbow Bridge. a sincere and heartfelt thank you to SCGRR for the privilege of caring for pearl. I remain ready, willing and available for the next angel in need.
– Debbie Rothschild