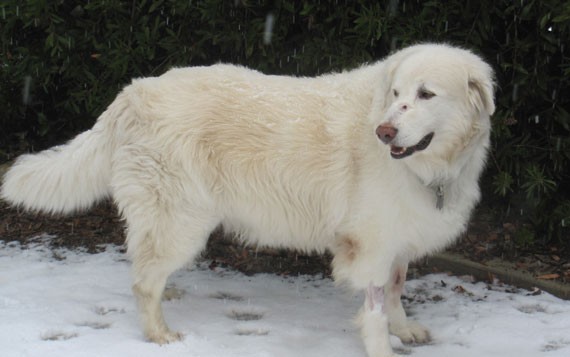 Reacher (Yeti) • Always in our hearts

Reacher was a Pyrenees -Golden mix, without the Golden characteristics and totally bonded to my husband.
We have two other female Goldens who are true Goldens and love to play. In the last year Reacher warmed up to me, tolerated the other two when they were playing, although it made him nervous. The last year he has been a loyal companion, protective of our home and the two females.
Reacher loved his daily walks, rides in the truck with my husband and of course, dinner time. He learned to try and play from the Goldens, even to chew up a pine cone but NEVER to chase a tennis ball. He took turns every night moving to both sides of our bed, checking on us, always on watch.
He was so beautiful with that snow white downy fur. Because of the golden mix, he had such a pretty face and the most beautiful amber eyes.