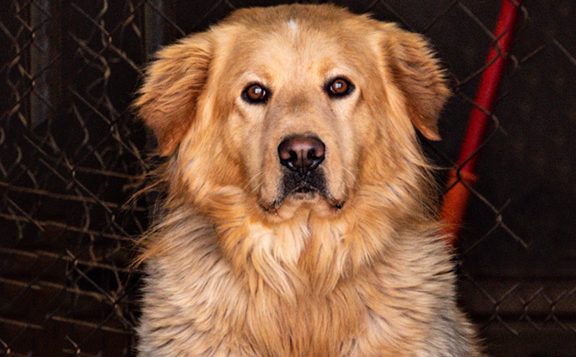 Rocco is a 2 year old beautiful Golden Retriever who ended up in a shelter at the end of February. He was quickly adopted, but then escaped from the adopter’s backyard and was lost in the valley for a week. After finally being caught by animal control, the family relinquished him he went back to the shelter. That’s when SCGRR was called.
Rocco is extremely, and we mean extremely, terrified of people and leashes. We don’t know what happened to him in his prior life, but he trusts no one. He is currently at a training facility where they have very slowly been working to teach him trust, and he has made a small amount of progress with the few people he sees regularly, but still has a very long way to go. Any new person or nearness of the leash causes him to shake with fear. We feel he would make even more progress in a quieter situation with only 1 or 2 people to learn to trust.
Due to Rocco’s fear, we are looking for a permanent foster who has the patience and desire to bring him along slowly at his own pace. This could take months or even more. He is not yet able to live in a house or in close proximity to a human. This person will need to install an indoor/outdoor run in the backyard to be his home – he is currently living in one at the training facility and this enclosed space makes him feel safe.
A permanent foster would start with the basics each day – feeding him twice a day and keeping his space clean. Simple acts like just sitting next to his kennel reading a book with no eye contact would a sample of the first step towards helping him trust. There can be no expectations from him in regard to affection or even wanting to be near you, perhaps for many months, as he works through his fear. He needs positive reinforcement every step of the way, and SCGRR will be here to help guide and support a foster in these steps.
Rocco has shown no signs of aggression, even when he was shaking with fear in his crate when brought into rescue. His trainer and caretaker at the facility have been in his kennel with him many times, and as he tries to stay as far away as possible, his body trembling, he has not been aggressive. We of course don’t know what his temperament will be if he learns to trust in the future, but we do know he is a beautiful dog and deserves a chance at learning to be able to give and receive love as most other Goldens can!
If you would like to learn more about what it would take to be Rocco’s permanent foster, please email Lori at regadog1010@gmail.com
Rocco’s ID# 5293