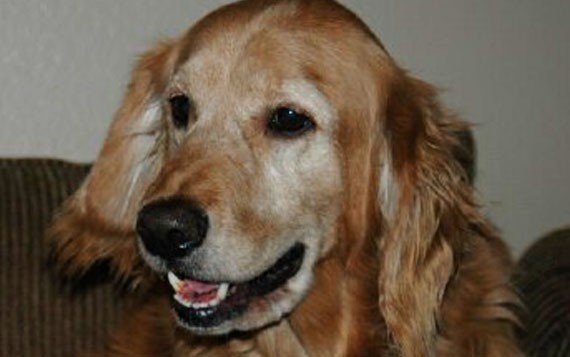 Sarge • Always in our hearts

Jessy chose the most beautiful day of the year to give birth to her nine beautiful healthy puppies. Just to please everyone Jessy made sure the litter had red and gold and beige puppies. For seven weeks Jessy cared for them and taught them lessons she knew they would need and she chose their future very carefully. At seven weeks and three days, the coordinator from Canine Companions for Independence came to select the most special puppies in the litter. Sarge was chosen. He was so proud that he did well on the test and his broad chest and big feet made him perfect for his future job. He said goodbye to the family and happily went off to CCI School to learn how to be a companion dog for someone wheelchair-bound. Sarge made everyone proud and learned his lessons well. He learned to keep his tail straight when he sat or it could get run over. He learned to brace himself so eventually someone could use him for support. He proudly wore his yellow vest and enjoyed outings to SeaWorld, went to school with his foster mother, and studied hard.
Then it happened, he grew so big his legs hurt. The doctor had bad news. He needed hip surgery and couldn’t stay in school. Sarge was going home to become a couch potato. He had no idea how well he would excel at this new path his life was taking. The surgery went well. First one hip and then the other. Sarge did his exercises and relaxed. He was very good at the latter. He walked, ran and became the best couch potato ever. Sarge slept on the rug during the day, on the couch to watch television in the evening and between his parents at night. Yes, he was a good sleeper.
One day another dog arrived and he realized not all dogs had the life he did and she needed to learn not to be afraid, that she would be warm, hugged, fed and loved. He showed her around the yard, where the clean cool water was, where the toys were and that it was sometimes okay to steal a shoe and run away. Pretty soon she left for her forever home and another dog arrived. Sarge became a pretty good teacher and his new career became teaching rescue dogs how to be, well, dogs.

Sarge crossed the Rainbow Bridge on December 1, 2008 at home in his mommy’s arms. His daddy whispering in his ear that he was perfect from the minute he was born. His wonderful vet was with him. Sarge never did a naughty thing. Even the day he ate the couch he was good. He was safe, warm, fed and loved every day of his life. His wish is that every dog could be as safe, warm, fed and loved every day of their lives, too. Sarge is proud to have been a part of rescue. He will play with his mother and sisters and brothers and all the dogs that crossed the bridge before him and he will wait until his mommy and daddy come for him. He will he young and healthy and not feel any pain.

Sarge I hope you know how much we love you. Stevi & Dave Martin and Family