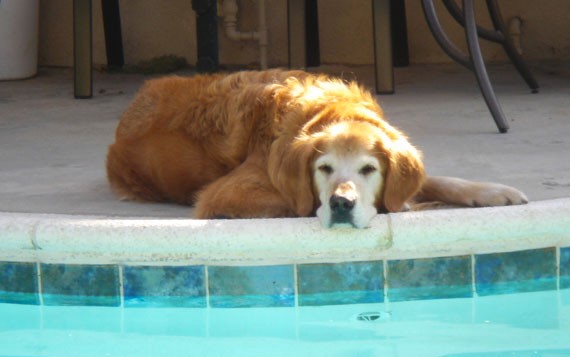 Shadow • Always in our hearts

Shadow was surrendered to our rescue due to a divorce in 2008, he was 10 years old. When Barbara Gale got him he was filthy, matted and infested with fleas.
Everyone that met Shadow fell in love with him. I was asked to foster him until we could put him up on our website for adoption. During the time I had him in foster he was having some incontinent problems. I took him to Dr. Brown at Pet Vet, they did some tests and found out that he had a growth on his spleen. The rescue decided to have the surgery to remove his spleen. Shadow prognosis was 7 months to live after the surgery.
He became the rescue’s first permanent foster. Well 7 months came and went and Shadow was going strong. He loved his long walks and his time in the pool.
He loved diving into the pool to fetch a tennis ball or tug rope. His favorite time in the pool was splashing the water with his paws and barking at the water. Shadow had the best manners of any dog I’ve owned. He wasn’t a counter surfer, didn’t get into the trash, had great house manners, knew lots of commands and loved other dogs and had the golden temperament.
Shadow lived for four years after his surgery. He was an amazing dog. Ron and I were blessed with having Shadow in our lives.
He will never be forgotten and well be remembered as a great dog with lots of love to give.