Who doesn’t love an airport greeting! Anticipation rises as you press against the overhang, willing your person to round the corner and make their way up the ramp, followed by delight at seeing them safely in the USA. Our two most recent China arrivals, Jai Ying and Meihui, made a rowdy entrance, anxiously greeted by SCGRR volunteers at LAX. Eight Golden Retrievers in total were led by porters into the Arrivals Hall along with Jeffrey Beri, founder of Beijing based rescue organization, No Dogs Left Behind and the flight volunteer. No stranger to using his voice advocating for change in the humane treatment of dogs in China, Beri, was the noisy one, the dogs were silent. 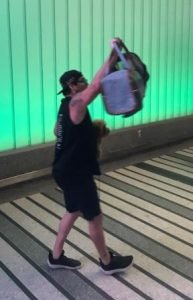 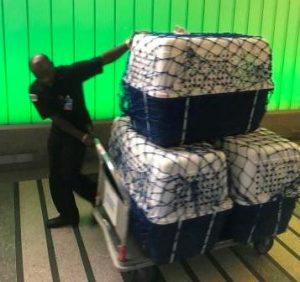 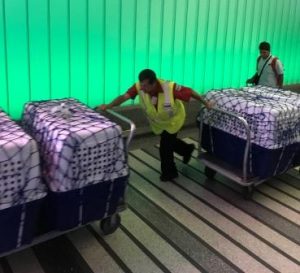 Heralding their arrival to loud cheers from the waiting crowd, Beri brought the first eight of 40 Golden Retriever slaughterhouse survivors rescued in August, to America. A lengthy and at times dangerous journey that included covert movement at night with the dogs stored in a refrigerated truck to avoid authorities pulling the truck over and confiscating undocumented or outlawed large breed dogs, or retaliation from the would-be butchers. Through a special collaboration with Golden Bond Dog Rescue, Homewood Bound and No Dogs Left Behind, SCGRR received two young, female, healthy, gorgeous pups.

If you haven’t yet been part of a “Greet the Goldies” at LAX , Tycanne Arceri (China & South Korea), joint international coordinator with Lori Hall (Turkey), can get you signed up.  SCGRR’s international program has been around since 2010, but was reignited in 2016 when we brought in 20 dogs from Turkey, in collaboration with Golden Retriever Rescue of the Rockies. Historically they came mostly from Taiwan, then Korea, and now China, Turkey and Mexico. 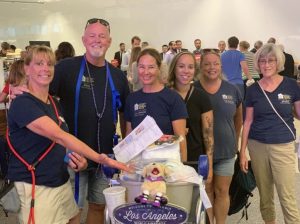 Much of the hard work for international dog arrivals is done before the dogs step paw in the US. Tycanne and Lori work with local partners in various countries, who notify them of potential dogs and subject to approval by the Board of Directors, they begin the inbound paperwork and permit process. Consideration is given to whether SCGRR has sufficient foster availability, the ratio of international to domestic rescues and balancing incoming dogs from all international regions (South Korea, Mexico, China and Turkey) to a limit of eight per month. Under the Animal Welfare Act (2008), regulated by the USDA, dogs imported into the US for resale, including adoption, must be in good health, be vaccinated for rabies, distemper, hepatitis, leptospirosis, parvovirus and parainfluenza virus, and be older than six months to be eligible for entry.  Specific paperwork completed in English by a licensed veterinarian in the country of export must be obtained as well as the APHIS issued import permit to accompany the dog on the flight.  Flight volunteers are always welcome! The difference in cost between dogs coming in accompanied or as cargo is significant, so if your travel plans are flexible enough to consider being a Flight Volunteer, click here.

First time LAX greeter Jennifer Hinostroza was one of ten SCGRR volunteers to meet Jai Ying and Meihui from China, and describes her experience:

4:00 o’clock, the hour we finally got to meet the rescues, after they had landed at 2:15 pm. The dogs came in large crates and as they were rolled up the international walkway by LAX porters, I heard a loud voice cry out, “No dog left behind! Freedom baby!” I locked eyes with one of the pups who had the look of confusion and exhaustion. I was then aware of the stench of feces. Mind you, the dogs had been in their crates for an excruciating amount of hours having been routed through Moscow from Beijing. I hadn’t known what to expect but suddenly I was overcome by strong emotions. I held back tears of happiness. My heart ached for what they must have endured and yet at the same time, I was so relieved that they would never have to go through such pain again.

Wheeled outdoors to a spacious area with a bed of wood chips, the team of volunteers put on their gloves and got to work. The first priority is to securely release the dogs from their crate and get them walking. Some didn’t move right away as I imagine their legs were weak from the trip. Followed by food and water. It was devoured as if they hadn’t eaten in days. We cleaned them up a little and began disinfecting the crates, a job that had me on my hands and knees inside crates full of feces, which I would gladly do again.  A small price to pay in return for one of their tender thankful licks and tail wags. Once the crates were dismantled we were ready to load the pups and transport the dogs to the vet where they are examined and cared for before entering foster homes. 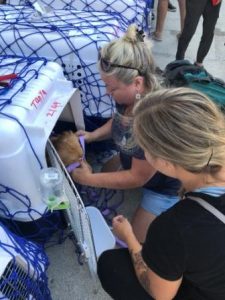 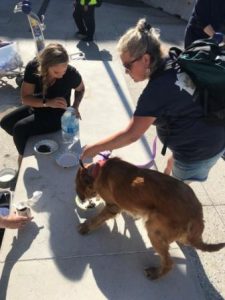 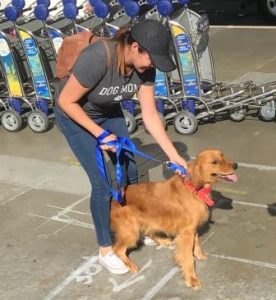 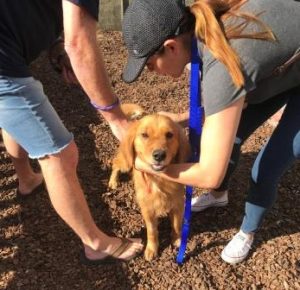 I drove home in silence during the hour drive. I thought of two particular Goldens we received that had been shaven. They were minutes away from their death. One had a large wound on his neck that appeared to be infected. Something (more than likely someone) had sliced away at his neck. The other had slashes all over his body and some old puncture wounds. I lost it. I couldn’t stop the flow of tears. I was filled with hate and sadness. I wanted justice. I wanted to educate the people I know about the importance of rescuing. I wanted to change the world.

I’m honored and fortunate to be part of such a wonderful organization and look forward to devoting more of my time to SCGRR.“

After a little over a month in foster care, Meihui  was adopted by her foster family. Meihui came out of the crate at LAX petrified and barely able to walk without cowering and shuffling as low to the ground as she could get, but has settled in well with her fosters and their previously adopted rescue Golden from Turkey, is helping to teach her house manners. Meihui, renamed Sansa, and true to her Game of Thrones inspired name, has overcome great challenges in her young life but is now thriving thanks to a safe and loving home. 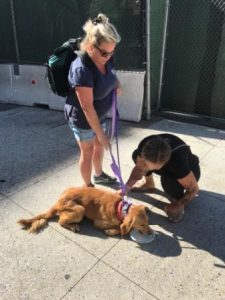 The latest update from her new family tells us “We didn’t know just how much we would bond with her nor did we know how much she would bond with us, especially with our other Golden Retriever rescue from Turkey Charlie (fka SCGRR Valentino). We could tell from the very first moment of meeting her, Sansa had had an extremely difficult past life, cowering at every unexpected noise whether it was a car door slam or a loud voice. It was very sad to see her so distraught. We worked with her for months to build her trust, to let her know that she was in a safe space. And being with Charlie, she seems to come out of her shell more and more every day. She is such a sweet little love who only wants affection and companionship, and she honestly seems so happy just to be alive. She and Charlie wrestle daily, she loves hiding toys throughout the house, running around the yard, and cuddling with us in bed. Like her name suggests, Sansa’s been through a lot for being so young, but she is truly rising above it all, and we are so happy and proud to call her one of our own.” 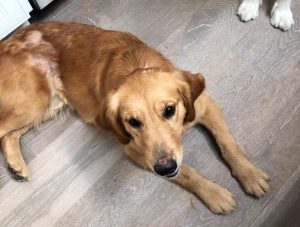 Jia Ying arrived skinny but immediately gained weight in the loving care of her foster family. 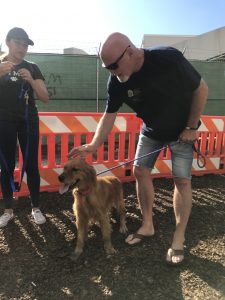 She is very lively, high energy, playful, affectionate pup. She learned English and many commands quickly. Jia Ying was fostered in a home with three resident canines, one, a young male Golden from Turkey who is similar in age and activity level. The two rough-housed, played tug-of-war, and chased each other constantly. Jia Ying was a water dog from the start. 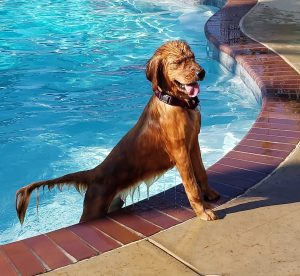 Jai Ying was adopted to a loving family and was renamed Annie. Her new mom tells us,  “Annie and I are more in-love each day. She is such a joy in my life. I tell everyone she fought all the way from China just to rescue me after losing my 16½ yr old golden Jack, in 2019. She is such a happy girl, and so smart!  I couldn’t love her more. We are together almost 24/7. She is so adjustable as we travel between San Diego and Temecula often. She just goes with the flow. When I have to leave her alone in the house she has been an absolute angel. I couldn’t ask anymore from her than what she has given me. Everyone goes crazy over her because she is so beautiful. Hard to believe I’ve only had her for three months, it feels like she has been in my life always. Thanks for bringing her to me, she is my life!” 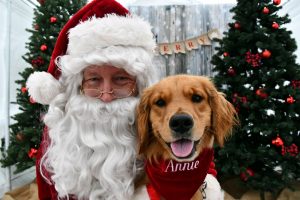 Golden retrievers come to SCGRR from many different sources and for just as many reasons, but the international program shines a light on the massive number of dogs that likely would not survive in the countries we rescue from.

Click here if you wish to read more about our International Rescue Program.

Other Ways to Donate

The cost of rescue is not cheap! Help cover spay & neuter costs, vaccinations, microchipping and even much-needed surgeries. Many animals are dumped due to lack of owner resources to cover easy to resolve conditions!